What is People Science Anyway? 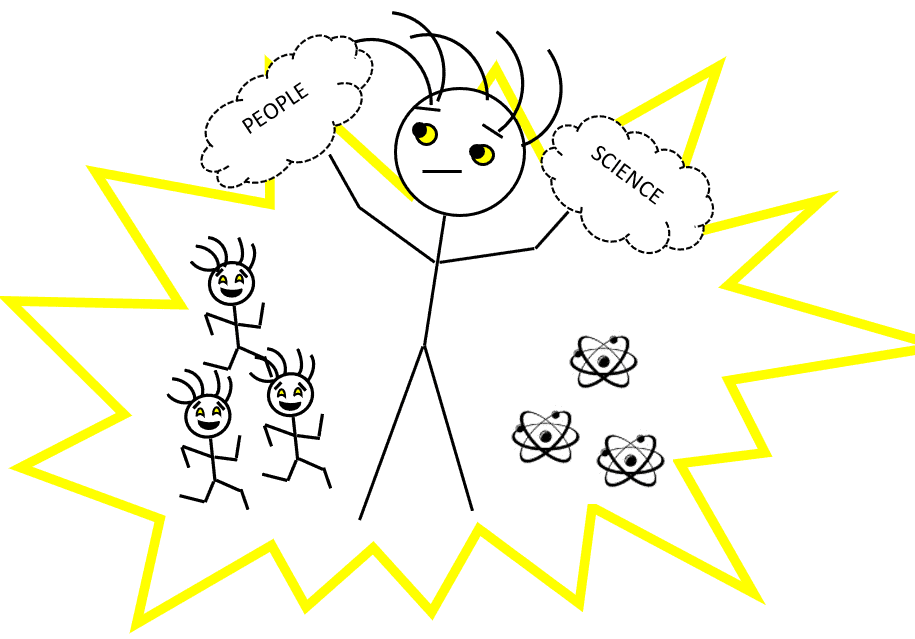 The term “science” is broadly misused.

I mean, isn’t science just the next inevitable casualty to join synergy, strategic, and disruption on the over-used buzzword trash heap? If that’s so, then the “people science” phrase warrants wariness lest it be meaningless jargon. I wouldn’t blame you for wondering about that, so I’ll share my rationale for using that phrase.

People and science are two commonly used words that I put together to convey an idea and a mindset.

Maybe this is just clever phrasing to sell an old-school idea to a new audience.

The science in people science.

First and foremost, science is about understanding-what-is. When we understand what is, then we are better equipped to make positive changes-in-what-is into what-will-be. If we start from an ideal of what ought to be, we then look for “facts” that support that. Then we are far more subject to bias, and compromise our ability to understand-what-is. If we don’t prioritize understanding-what-is, we have abandoned science.

A lot’s been said about the role of ideology in shaping and building social groups of all sizes and scales. When we can imagine a beautiful future, it’s really appealing to want to achieve that Utopia. It’s human nature to strive for something better. Whether it’s an autocratic human-comprised machinery of the command-and-control ilk, a Nirvana of magically financially-sustainable collectivism, or some other form of idealized unrealism, the problem is the same.

We have assumptions about what creates value and growth in people and business.

Often, our assumptions are false. They are based on ideology instead of science. To be annoyingly pragmatic, ideologies are founded on ideals, which sound lovely, but aren’t something that can ever be fulfilled because they are founded on false assumptions about how-things-are. In the real world.

People science is about full commitment to understanding-what-is.

In order to understand what is, we must be rigorous about using a science-based process of theory-hypothesis-test. If we don’t use this process, our wishes and imaginings will seem more real and more substantive than they are. Why would that happen? Human nature.

People science isn’t about adherence to any one scientific-endeavor-du-jour like fMRIs and psychometrics, although these science-y endeavors might help us generate hypotheses about how-things-are. People science is founded on the premise that humans behave, on net, consistently with our natures. Pet theories and ideologies are likely to be error-riddled and send us off track more often than not.

People science is hard to do consistently.

This is because we humans aren’t really wired to see things-as-they-are. We have a human bias and perceptual errors because they work rather well enough without costing us too much mental energy. It takes effort to see things as-they-are.

And for the rest of it– we don’t know what we don’t know. This is especially important to remember when majority-think is leading us with a heavy hand to see the world in a particular way. But these are problems we can’t eliminate. The best we can do is be rigorous and open to testing our hypotheses about how organizations and people work.

Why people science matters for business.

It’s a good idea to think of business as a process, rather than as a thing. It isn’t a thing. Things are bank accounts, balance sheets, and stacks of gold bars. A business isn’t just the people either. People glom together for lots of non-business reasons. So think of a business as a process– the process of turning the energy and ideas of people into economic value.

A strong business is really good at converting people energy into economic value.

This makes good sense, doesn’t it? So you have people that generate people energy in your business. The more of this energy that becomes economic value today-tomorrow-and-far-future, the better and stronger the business. Which do you think is going to do a better job of this conversion—ideology or people science? Right. People science.

Let’s illustrate with the tale of two bridges.

Check out the rainbow bridge.

It’s very pretty— but it’s made of light reflected off of water droplets. Is it really going to hold your car? This rainbow bridge is like non-science based theories about people and organizations that look pretty but lack the substance and support of a real bridge. Fervent hope and good intentions aren’t the same thing as the principles of human nature.

Next up is a science bridge.

It’s a real bridge made from real, solid bridge-making ingredients. This bridge uses the principles of structural engineering and is designed with the laws of physics (e.g., science) in mind. I’m more likely to trust this bridge. Aren’t you?

The same distinction exists in business.

The business-as-process model is reliant on people producing and creating value together- in a coordinated fashion. People-rainbow-alchemy or people science. Which do you think works best?

How do we do figure out what works best? We commit to inquiry. We commit to understanding-what-is. We remain open. We ask ourselves how we test our assumptions and then set about testing them. We commit to rigorous process.

This is people science.

I’m not the first one ever to think of things this way.

Here are a few of my influencers.

I read and learn from many brilliant thinkers, some of whom I’ll describe below. There are too many to mention, so I leave you with this non-comprehensive list. It should give you a sense for the foundations of my approach to people science.

Elliott Jaques spent a bulk of his career noticing and demonstrating that different people problem-solve according to different implicit time horizons, that these time horizons match up to measurable differences in the complexity of work, and then establishing the organizational design and people practices standards that leverage those discoveries. Jaques’ work is the height of old school know-how that’s oh-so-tempting to ignore because we’re too modern for all that stuff. Jaques’ work has been born out by decades and decades of evidence. Like advice from your grandmother, ignore at your own peril.

Learning more about Elliott Jaques’ work. If you want to read directly from the horse’s mouth, then saddle up, because you’re in for a dense read. Here are a few books– not written by Jaques himself—that are more welcoming to the less-committed, but RO-curious set.

• The End of Management Alchemy by Darwin Mott
• Outbound Air: Levels of Work in Organizational Structure by Tom Foster

Speaking of listening to your grandmother, (in)famous mathematician Nassim Taleb of Black Swan fame inspires my thinking with his references to having skin in the game, anti-fragility, domain-specificity of expertise, and the perils of misappropriating statistical methods in social science. Taleb is about 20x smarter than me and he doesn’t mess around with suffering fools gladly. As a rule, I like to learn from people who are 20x smarter than me, and Taleb qualifies.

Learning more about Nassim Taleb’s work. Taleb is another producer of books-of-substance that don’t get read in a single cross-country flight. The easiest entry into Taleb’s work is his Incerto blog. Beware. He’s an equal-opportunity provoker. I don’t think anyone is immune to his critiques and barbs.

• Fooled by Randomness:  The Hidden Role of Chance in Life and in the Markets by Nassim Taleb.

Ray Dalio is the founder and co-chairman of Bridgewater Associates, which, by all accounts, does pretty darned well. He credits their rigorous approach to building an idea meritocracy. His approach to ensuring radical transparency and rigorous feedback through the use of everybody-plays inquiry and discussion protocols isn’t for everyone, but I really love it.

Dalio’s approach is a science-friendly process to finding truth through the transparent sharing and vetting of perspectives about complex issues. People, organizations, and business are complex. I think we all have something to learn from Dalio. I know I do.

Learning more about Ray Dalio’s work. Recently, Dalio has spent more time in the public spotlight sharing his philosophies, so it’s a lot easier now to access the “secrets” of long-term, differentiated success in the financial markets. Below are some good places to start.

• Principles: Life and Work by Ray Dalio.
• An Everyone Culture: Becoming a Deliberately Developmental Culture by Robert Kegan and Lisa Laskow Lahey.
• Interview with Charlie Rose.

I forget how, but I came across Haidt’s work on values in human society a few years ago. It was the first time I’d seen a thoughtful treatment of moral reasoning that didn’t default to my-team-is-obviously-right-so-the-other-team-is-wrong-and-stupid.

Morals, and their more commonly referenced cousins, values, are intangible abstractions and about as non-science-y as you can get. Until you realize that math is a bunch of intangible abstractions too, and math is awfully science-y, so maybe there’s hope. And then you realize that you can seek to solve a situation by maximizing X, then Y, and then Z…or you can solve first for Z, then Y, then X. And maybe it’s hard to know whether X or Z should go first from an objective viewpoint. All of which, interestingly enough, is a more objective, process-driven way to think about morals and values.

Values matter when dealing with people and organizations if you want to have any hope of truth-seeking and sound reasoning, so maybe it’s not so science-y to pretend that moral reasoning doesn’t exist. Nor would it be reasonable.

Another way Jonathan Haidt’s work informs people science is the reminder that even scientist-science has a hard time shedding all traces of subjectivity and motivated reasoning. So it’s more science-y to remember that human nature is a condition that reliably warps our perceptions.

Books and resources to learn more about Haidt’s work. Here’s some good places to start.

Peterson, a psychology professor in Canada, has become (in)famous for semi-political reasons that have little to do with why he’s so influential to my thinking. His influence stems from his call to speak your truth, get yourself in order, and know you’ll probably be wrong. The pursuit of truth is a worthy pursuit and one that takes a great deal of humility. Hard, but worth it. Like people science.

To do people science, we must listen to evidence and listen to other people, and then make our best assessment of how things work. And assume we’re probably wrong. So we call these well-informed best guesses what they are—hypotheses, not answers. Hypotheses can be tested, whereas answers can’t be questioned. And that, hypothesis testing, that’s science.

Where to learn more about Jordan B. Peterson’s work.

In closing, you can do people science too.

Call me to discuss more about people science in your business.