Managers are Accountable for Employee Performance 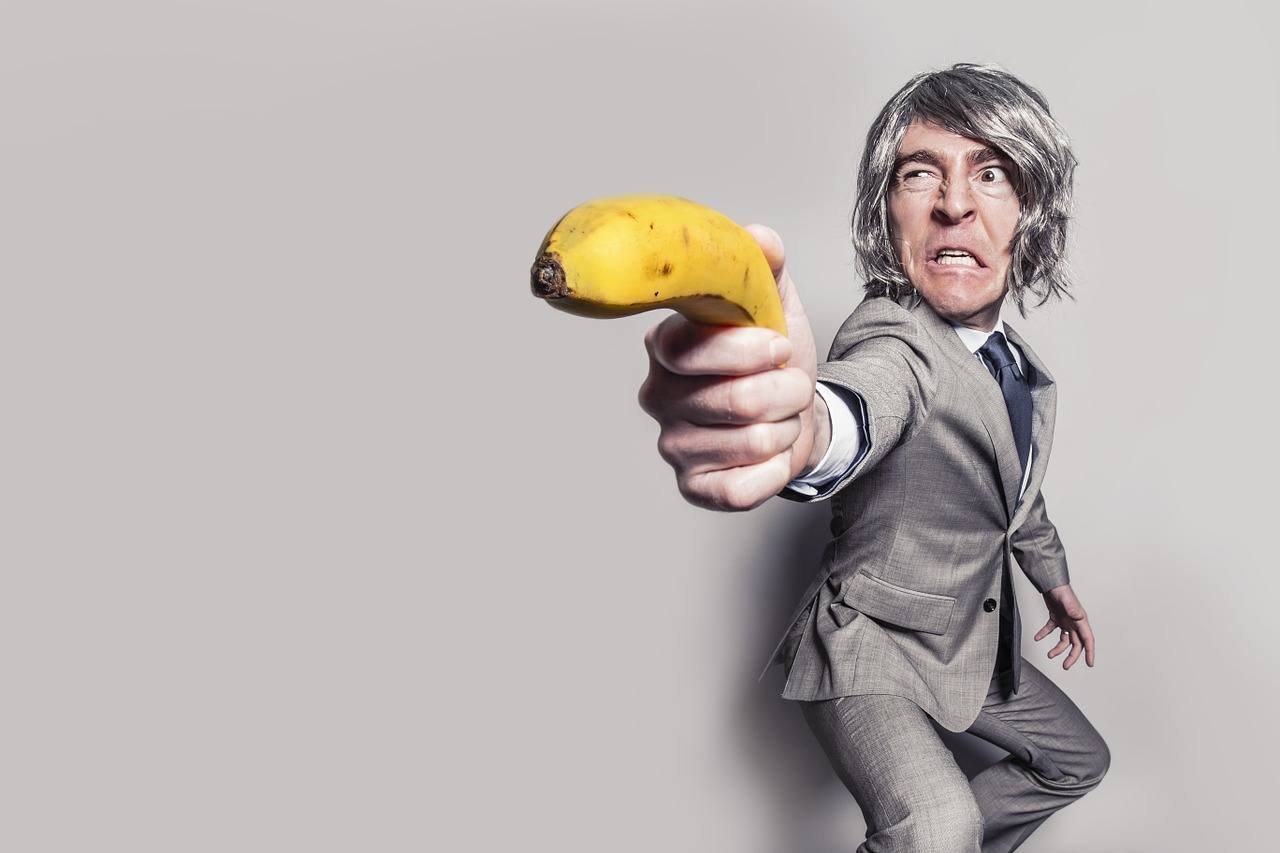 Let’s talk about being a manager.

I’m not just a manager, I’m a leader!  So you say. Now don’t go spreading yourself too thin. There’s more to this manager thing than you know.

Remember what I said in Truth #8 about performance reviews?  I said that you, as a manager, are responsible for the performance of everyone on your team.  And you know what?

Oh come on!  Aren’t I supposed to HOLD PEOPLE ACCOUNTABLE?  I’m not a baby sitter.  I’m a leader and I’m supposed to LEAD, not do their job for them.  Professionals should know how to stand on their own two feet.

What kind of woo woo emotionally wrought drivel is this anyway?

Being accountable for someone else’s output.  It’s counter-intuitive.

More than that, it’s incongruent with the image of large-in-charge-charismatic leader that we’re all infected with.  On the surface, it doesn’t feel results-focused.  Gosh, I mean.  It doesn’t even feel like REAL ACCOUNTABILITY.  And that is scary.

Now that I’ve coddled you a bit, it’s time for some harsh truths.

Systems drive behavior. If you believe that your employees have control and influence over all of the systems, practices, and competing priorities they are surrounded by when doing their work, you are wrong. It’s not unusual to find a business filled with processes that make it harder for some (or all) employees to deliver the results that they are held accountable for.

Yeah, it’s easier on you to play the blamedy-blame game with your peers and boss when stuff doesn’t work out.  Sorry stuff went wrong.  Don’t worry boss.  HEADS WILL ROLL! 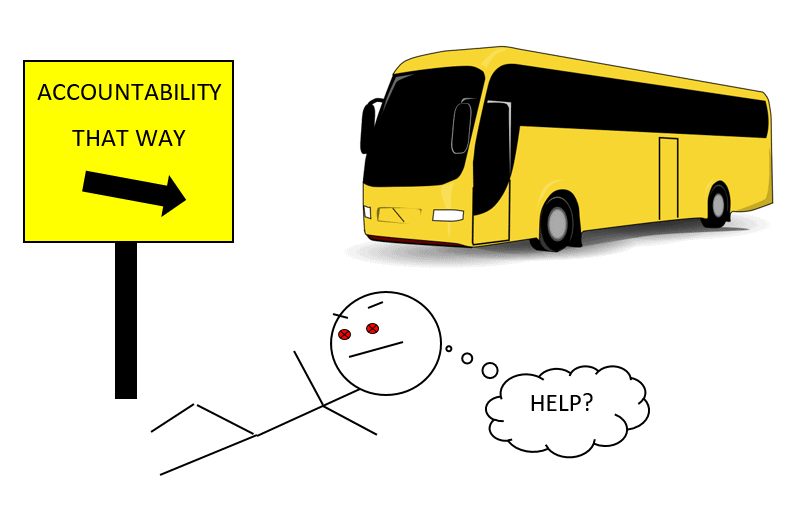 Well aren’t you a badass.  Congratulations.

Instead of throwing a team member under the bus, how about making a bold move and [thrive_highlight highlight=’#eeee22′ text=’dark’]standing right in front of the bus with them[/thrive_highlight].  You do this because you are responsible for each member of your team’s outputs. If things went off the rails, then it is YOU who dropped the ball. Your job is to ensure a clear and open dialogue so you could support and adjust so things get back on track. Doesn’t owning the blame just put you at risk?  Well, yeah, I guess it would if your boss wouldn’t do the same thing for you.

Imagine how it would feel if your boss had your back.

Well, that does sound quite nice, but how can this really work? Let’s re-set the conversation so we all know what we’re NOT talking about when we say that a manager is accountable for the work outputs of the people on her team.

First, it doesn’t mean you do your employee’s work for them.

I don’t imply that a manager-employee relationship is just like a parent-child one, because that’s silly.  I am saying that the analogy does a good job of explaining the distinction between responsibility for the doing of something and the responsibility for the results.  Yes. The person accountable for the DOING can be different from person accountable for the RESULTS.

Second, it doesn’t mean that you can’t fire people ever.

Because that would be ridiculous.  Not only CAN you get rid of employees who can’t or won’t do the work, you are responsible for doing so.  Keep in mind there are good and bad ways of going about this.

If you focus only on hiring and getting rid of people without any performance enabling activities in the middle, well then that’s just bad management.  And bad management like that costs your business SO MUCH MONEY.   Unnecessary churn inflicts a huge financial penalty on the business and mostly in ways that you aren’t aware of.  Doing that is what should get YOU fired.

How would you like to not cost your business by SO MUCH MONEY. Sounds like a smart idea, doesn’t it?

A nod to servant leadership.

The Servant Leadership mentality is one way to make sense of your role as a manager who is accountable for the performance of her team members.

The servant-leader is servant first… It begins with the natural feeling that one wants to serve, to serve first. Then conscious choice brings one to aspire to lead.  (Robert K. Greenleaf)

…(E)ffective leaders and managers need to serve their people—not be served by them. (Ken Blanchard)

If servant leadership isn’t your gig, then I’ll appeal to the engineering and research-oriented mindset of Elliott Jaques.  Jaques spent 50 years studying how people work together in organizations. He discovered some fundamentals that, when consistently applied, optimize trust in the organization. Since then, 70+ PhD’s and other experts have conducted lots and lots of studies that validate the efficacy of Jaques’ findings.

You want to win by building trust.

If the moral argument doesn’t resonate with you, surely you can get on board with doing things in a way that enhances trust in society.  And your business.  Because healthy levels of trust in your business create a positive economic impact.

Above all, success in business requires two things: a winning competitive strategy, and superb organizational execution. Distrust is the enemy of both. I submit that while high trust won’t necessarily rescue a poor strategy, low trust will almost always derail a good one. (Stephen M.R. Covey)

A winning competitive strategy is the work of senior leadership. Let’s set aside that part of the formula for business success because it’s not the work of ALL managers. Yet, it stands to reason that ALL managers must be responsible for the execution and trust parts of the formula.  Hence, as a manager, you are responsible for executing on strategy in a way that enhances trust.

Defining what a manager does.

A manager is accountable for the collective output of other people.

This isn’t according to me.  This is according to Elliott Jaques.  Having precise language describing what being a manager means allows us be assured that we are talking about the same thing.  What sets you, as a manager, apart from other colleagues who aren’t managers, is that you are responsible for the outputs of other people.

This might make you anxious. Employees not accountable for their own results?!  That’s cray-cray.  How can that even work?  You do this by providing context and discernment that add value to the quality of work of your employees.

You are not a manager so that people can report to you. (Tom Foster)

Speaking of work, let’s first talk about what work is.

In his final book, The Life & Behavior of Living Organisms, Elliott Jacques talks about the difficulty in determining what work is.  The first problem is that when we talk about work, we use the word in a whole bunch of different ways. Confusing enough for you?

Let’s just rephrase this a bit.  That was tough WORK doing the ASSIGNMENTS I was given in my ROLE.  The work, itself, is judgment and discretion.  It’s a creative act by the individual based on judgment in order to achieve a desired result over a period of time.

Even a ditch digger is using judgment and discretion in doing his/her activity. How deep to dig? Where to dig? How long and wide to make the ditch?

An employee is responsible for applying his discretion—for doing work.

Your employees likely believe they are ALSO accountable for their own results.

Of course they do!  They are proud of their results when they are good and are willing to take the heat when they mess up.  It seems the adult thing to do.

Design assignments that take advantage of an employee’s full capability.

I’m not going to get into the ins and outs of assignments and delegation.  What’s important here is that you right-size the assignments for each employee.  Make them meaty for the person in the role.  If you do this, you bypass the icky feelings that course through your veins when someone says the words hierarchy, command, and control.  If you are qualified to be this person’s manager, then meaty-for-them is not quite meaty-for-you.  This is how it should be.

What happens when the employee isn’t performing?

This isn’t rocket science. I’m about to say something you’ve heard 1000 times already.

You should be coaching and guiding and providing performance feedback all along.  Role clarity should be a no-brainer for all involved.  And you also should have done your best ensuring that you’ve put the right person into the role. But sometimes, as we know, no amount of support and guidance will enable a struggling employee to perform the full demands of the role.

Not performing. That kind of stinks for the employee too.

Think about it.  Being out of your depth in a role is no fun.  No amount of fancy job titles, big salaries, and stock options make chronic underperformance enjoyable.  If the person doesn’t quit or find another better-suited role first, it’s your job to do it for them.

Remember that your job is to execute strategy in a way that induces trust.

Taking full accountability for the outputs of your team members– but not the doing of the WORK itself– is the best way there is to elevate the performance of your team.

Imagine what happens when ALL managers in your business are fully accountable for the output of their direct reports.

Keep in mind that the accountability of an individual contributor doesn’t keep rolling up to the CEO.  Accountability for outputs sits with that person’s boss.

Managers are accountable for the output of individual contributors.

Directors are accountable for the output of managers.

Vice Presidents are accountable for the output of Directors.

And, yes, the CEO is accountable for the output of Vice Presidents. 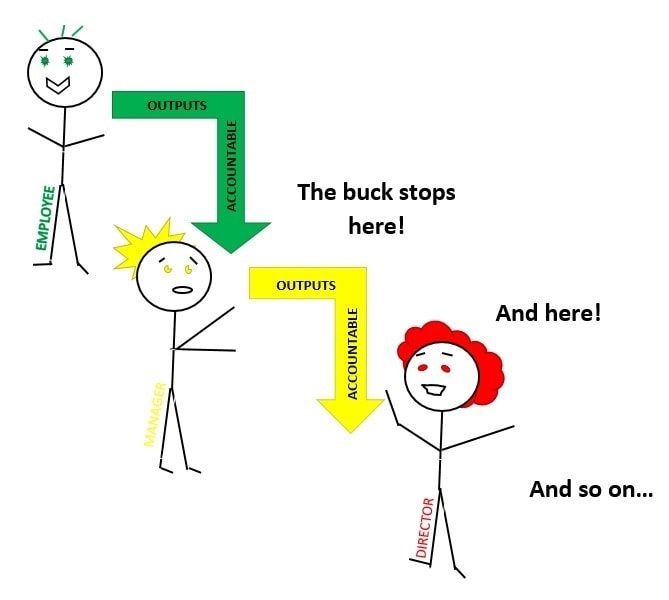 At every level of the organization, people KNOW that their bosses are responsible for setting the stage for their success.  People KNOW what their work is and can SAFELY INVOLVE their boss if things aren’t going as planned.  In fact, these people are RESPONSIBLE for doing so.

All of this builds trust.  Further, it optimizes coordinated work output.  If you adopt these philosophies, value creation in alignment with your business strategy is at an all time high.

Isn’t that what you want for your business?

I’m pretty sure it is.